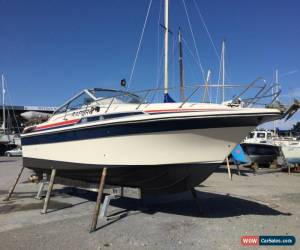 This is classic quality Scandinavian berth in two cabin fast deep vee cruiser built by the highly regarded Windy boats which is part of the group who also build Draco boats. Very nice boats for going places comfortably. Not big on accommodation but she has berths in two double berths and two decent cabs. She also has full hood with standing height for the cockpit and large double cockpit sun berth. For Nav assistance there is Raytheon gps chart plotter which works well with depth sounder compass and speed log. She is currently ashore in Plymouth post having had her antifouling redone in August.
We used her last in late July culminating in beatiful run close to the coast from Exmouth to Plymouth via Dartmouth and Salcombe on day which was sunny and warm but not flat. She made the trip delight. We had all the hoods down and cruised without effort at between 20 to 24 knots. She does 22 knots when clean at 3000 rpm and over 30 flat out when clean and trimmed for speed.
Condition wise, on the good side. The boat, engines and drives plus kit is pretty good. She stood for year with little use and in early July took her on, got her lifted, drive oil checked along with engine and power trim and steering oil by the folk who had been servicing her. suspected she needed two new batteries so got two new ones just in case. Since she has had several good runs. The engines are think impressive installed in her, quiet, no smoke, no turbo lag, she just starts easily and goes. She was polished about yrs ago and still looks good. Not so good side is she needs some varnishing, tidying up of flooring in cockpit, few hood fittings, some new Perspex to replace crazed cab windows, upholstery and head lining not brilliant in places and that sort of thing. Engine, drives and kit wise pretty good but one prop damaged As is the speed log prop (gone). few anodes on power trim needed although might have some to go with her.

Overall she could do with some work but is now up and running and is fantastic relatively economic boat of great value. The engines and drives alone are worth the money believe.
Feel free to contact Pete on 07880 501272.