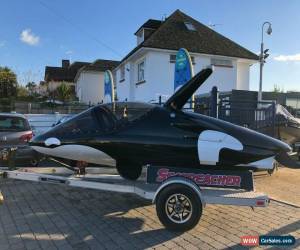 THIS THING IS INSANE AND SO MUCH FUN !!!
ONLY KNOWN ONE IS THE UK
CAN DELIVER  ANYWHERE UK EUROPE AT BUYERS COST

The model is the first Seabreacher with fully retractable snorkel, allowing pilot and passenger to experience the thrill of high speed 360 degree barrel rolls. The model, which replaces the original model, retains the friendly dolphin style body but with much higher performance and “aquabatic” capabilities. This new model will come standard with Rotax 260hp supercharged engine, two seats, and fully vectored thrust system. If you’re looking for the most extreme watercraft on the market today, the model is definitely for you.

The Seabreacher represents dramatic breakthrough in recreational boating. Over ten years  of meticulous engineering and extensive testing have resulted in very safe and stable watercraft that can endure the continuous punishment of the marine environment. Each Seabreacher is hand built to the individual customer’s desired specifications.
Available in Shark style model, Killer Whale mode, or Dolphin style model; each Seabreacher is unique creation where customers can select from vast array of individualized options. The organic lines of the vessel’s sculpted body present an unforgettable sight, like the twisted union of marine mammal and high performance fighter jet. The acrylic canopy and underwater view ports give pilot and passenger near 360 degree view as they fly through the water at breathtaking speed.
Unlike conventional watercraft that only operate on two dimensional plane, the Seabreacher operates more like an aircraft with full three axis of control – pitch, roll, and yaw. This allows the vessel to carve left and right, jump over, dive under, and cut though the waves. Our latest model is even capable of 360 degree barrel rolls on the water!
The hand sticks move forward and backwards and are connected to the front wing on the corresponding side. If you push them both forward, they move both wings down and it sucks the center of the craft under water. If you pull them both back the boat will get up on the plane. If you push one forward and pull one back it will roll the boat to the side and vice versa rolls to the other side.
The pedals move left and right (which turns the jet nozzle left and right) and turns the boat left and right on level axis. The pedals also move up and down which moves the jet nozzle and rear elevators up and down. Pushing your toes forward points the jet nozzle downwards, forcing the nose to point down (takes the boat into dive). Pulling your toes back points the jet nozzle up, which brings the nose up (for coming out of dive).

The main wings have to be held down during dive and work like airplane wings in reverse, offsetting the buoyancy of the craft and holding it underwater. Different variations of the controls at different times result in the varied maneuvers we can perform.
All models are approved for recreational use and sale, and can be registered as conventional inboard powerboat in most countries. Please note, the Seabreacher is not considered submarine or jet ski.
The Seabreacher is only meant to dive just beneath the surface for brief durations. You typically do not go lower than 5-6 feet, and it will also depend on your level of experience as pilot. Most people are under for about 5-10 seconds at time, and almost always have portion of the snorkel above the waterline. More experienced drivers can stay underwater for longer durations before launching through the surface. You also need to consider the snorkel/dorsal fin, which is your air intake for the engine. Diving below snorkel depth will only cause the engine to stall, and then the boat will always pop back to the surface. Unlike typical submersibles, the Seabreacher is always clearly visible when performing dives – similar to certain jet skis operators who are able to force the ski underwater. You will still see the large wake behind the boat, in addition to still hearing it. We strongly recommend that our customers utilize chase boat with radio communication between the Seabreacher and that chase boat.
The Seabreacher is positively buoyant, and has been engineered to always self-right. Imagine if you have cylinder and you add metal weight to the bottom of the inside it and lightweight foam to the top of the inside. Even if that cylinder fills with water, the heavier part of the cylinder will always rotate towards the bottom and the lighter flotation part of the cylinder will always float to the top. This is how the Seabreacher self-rights. Early model stand up jet-skis used to do the same thing, but as they got bigger and much wider they could no longer self-right and would stay inverted. Because of the cylindrical shape of the Seabreacher it was relatively easy to make the vessel self-right. The heavy wings and engine weight are all located low in the vessel and therefore gravity pulls them over to its right side up.


VIEWING BY APPOINTMENT ONLY