» Boats for sale in UK » Notspecified » Ranieri Shark 19 - only one in the country! Little used ex-Salcombe boat!

Ranieri Shark 19 - only one in the country! Little used ex-Salcombe boat!

Do you like this boat?
Ranieri Shark 19 - only one in the country! Little used ex-Salcombe boat! for sale
Current customer rating: 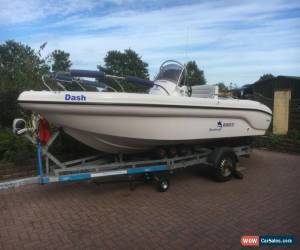 have owned ‘Dash’ for seasons. She is an ex-Salcombe boat where she was on the water for weeks in the summer and other short durations.
The ‘Shark 19’ was pared back version of the more popular Revolution Series of boats but was supplied ‘bare’ – without fixed fuel tank, console rails or bilge pump to achieve better price point.  It is believed that this was the only ‘Shark’ model imported into the UK by the dealers.
The boat has now been fully updated to the higher specification and enjoys all the features originally omitted by the manufacturer.
Within the last month 65l fuel tank has been fitted under the centre console with fuel gauge on the dashboard.  A bilge pump with automatic override has been installed.  In advance of last season custom console rail was supplied and fitted by Marine Track Engineering in Mylor Yatch Harbour at cost of £850.
The boat is supplied with Cobra fixed VHF radio and Banten 1.2m antennae, together with holder for supplementary ICOM handheld backup unit.  Navigation is via Lowrance Elite 7Ti touchscreen unit, fitted into the dashboard and liked to CHIRPS transducer.
The boat has also been fitted with round removable picnic table on chrome pedestal leg. She has stainless steel re-boarding ladder and galvanised plough anchor with 5m of chain and 30m of nylon rope. She has dedicated anchor locker. She has red fenders with matching warps.
The De Graaf roller trailer was serviced last year and was fitted with new energy store. The brakes were replaced during the previous season along with the cables. The trailer has rubber wheels rather than conventional wobble rollers and am able to launch and recover the boat unaided.
A new battery is being fitted this week.
This is not the original engine supplied with the boat she was re-powered before purchased her.

The Suzuki DF140 was serviced in 2017; during 2018 she was in the water for weeks but only used times. In 2017 the engine was checked by Mylor Yatch Harbour technicians and was shown to have run for only 65 hours.  I do not expect the engine hours will now have exceeded 100 hours and will guarantee the figure to be no more than 120 hours of total running time.
The boat is very light and perhaps overpowered by the DF140 engine.  I have had 43 knots out of her (on one occasion only!) and would suggest that with people on board she will easily achieve 45 knots (if you are brave enough!).
The body work is in excellent condition with the odd mark commensurate with her age.
Having fitted permanent tank under the centre console some storage space is now available under the rear seat along with large dself-draining storage pod under the pilot seat.  There is also further very large self-draining storage space under the sun deck.
The boat has been maintained and upgraded regardless of cost and is an excellent example of this flexible family boat, with high free board to ensure your little ones are safe onboard.
Available for viewing near Truro in Cornwall.

No offers. Priced fairly for what is on sale.

Advertised elsewhere so may be removed from sale without notice

Boat will not be released until funds have cleared.

Cygnus Cyclone 30 Patrol in Fantastic condition and ready for her next owner
price £129,950.00