Do you like this car?
7.55m Cobra Rob, 2014 Electronics, 275 Mercury Verado for sale
Current customer rating: 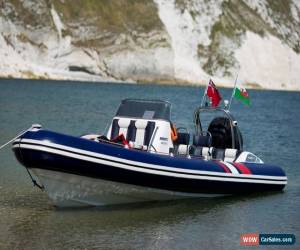 For Sale is our fabulous family Cobra Rib, great offshore sports RIB with Deep Vee hull. Its 2007 Boat Engine originally which incredibly has only done 160 HOURS FROM NEW! And we've upgraded it, cared for it and serviced it throughout so it feels much more modern. We’ve had great times in this boat in Fowey, Poole, the Solent, Weymouth the Severn in seas slight to rough.  The kids have learned to Wakeboard, we saw basking Shark off Studland and we’ve learned lot about the sea, but its now time to let her go.
I bought the SBS R4/2600 trailer new in Jan 2013 (and have upgraded that to 316L Stainless fittings). On the boat I’ve installed Honda water fuel separator and in 2014 upgraded the electronics to include Fusion 700 Radio with ipod dock Bluetooth Music, GPS SMS type Boat Alarm that texts you where the boat is and the latest touch screen Raymarine e95 Chartplotter with CHIRP Sonar. In 2016 she had brand new gel type marine batteries (cost £500), the engine is serviced regularly we replaced the water impellor at the start of the 2015 season. Also new in 2015 was brand new Boat Cover we re-covered the rear bench seat, both by Dorset Marine. In 2016 the entire front seating area was replaced by Cobra.
She’s been at Hamble Point in 2015 but has then been stored inside through 2016.  This must be one of the very best 7.5m Cobra Ribs for its year currently available in the UK and is fabulous boat to Pilot with whisper quiet engine. The price includes spare prop and the wheel braked trailer- give her good new home please.
Currently on sale with Cobra Marine too and now in their Warehouse in Lymington if you wanted Sea Trial.  https://www.cobraribs.co.uk/product/2007-nautique-7-55/