Do you like this car?
1991 Topaz 37 Sport Fish for sale
Current customer rating: 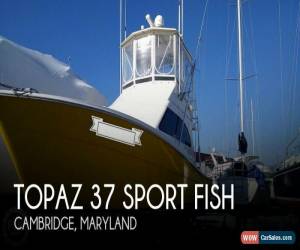 350K In Documented upgrades years ago, All new wiring,

If you are in the market for sportfish/convertible boat, look no further than this 1991 Topaz 37 Sport Fish, just reduced to $199,900 (offers encouraged).

This vessel is located in Cambridge, Maryland and is in great condition. She is also equipped with twin Cummins engines that have 1,420 hours.

We are looking for people all over the country who share our love for boats. If you have passion for our product and like the idea of working from home, please visit SellBoatsAndRVs [dot] com to learn more.

This listing has now been on the market 30 days. If you are thinking of making an offer, go ahead and submit it today! Let's make deal!