Do you like this car?
1975 Other for sale
Current customer rating: 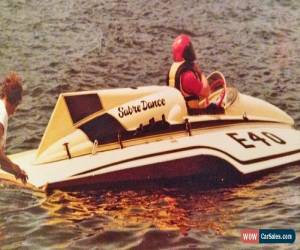 Vintage 1975 Hydroplane Race Boat E40 Sabre Dance
Happy to assist with affordable shipping. Please contact with any questions or shipping quote: 310-600-1182 Jonas
This boat would be an excellent start for someone looking to get into Vintage Hydroplane racing. It would also be fun toy for the lake, or make for beautiful addition to anyone’s toy collection. The boat comes with the trailer and some spares.
Copy and paste link to see it running: https://www.youtube.com/watch?v=uqamnk2mxOU
NOTE: The boat is complete, but not running at this time. The 350 V8 motor will need to be rebuilt or replaced. do have friend with period correct 283 V8 ready to run that could source.
This boat was completely restored in 2015 after two year restoration. Every item on this boat was replaced or restored. The wood, hardware, engine, paint; everything was replaced or repaired. The entire restoration process has been documented with an extensive logbook with every day worked on the boat described and dated. Every receipt was also kept and many photos taken of the process. The original blueprint plans for the boat when it was originally built in 1975 are also with the documents.
I bought the boat in 2017 and finally got around to run it about six months ago. was amazed how well the boat drives and handles. Once the boat gets up on plane it is incredibly smooth and stable. The boat was very easy to drive at speed and handled great. These boats were regarded as some of the best driving boats in their times. We ran the boat for the afternoon and it did great. got my father in the boat who is now 75 and had not been in hydroplane in 50 years. It was amazing! Unfortunately the engine got hot and eventually would not turn over. have not had chance to find out what is going on, but the boat is not running now and suspect it will have to be rebuilt. was going to get crate motor and put in it but just don’t have the time with all of my other projects.
I have an extra prop, the crane straps and couple of extra carburetors that came with the boat. The trailer, which is in great shape, also goes with the boat. also have full cover for the boat that will include in the sale.
History:This hydroplane boat was built in 1975 by Jim Mowery. The boat was an original design of Jim’s which was based upon the popular design of Ron Jones and he used Ron’s engine cowl. It was powered by 1956 265 Chevrolet V8 engine and later by 1965 273 Plymouth. It was raced in the 280 or class which is stock liter engine class. It was raced in 1976 and 1977 by Jim Mowery and later by Will Muncey. The boat was later found in 2013 by Jay Randolph. There was not much left of the boat, but Jay completely restored the boat in 2013 and finished it two years later. bought the boat in October of 2017 to fulfill dream of driving hydroplane with my father that used to race them when was kid.
A non-refundable $500 deposit is required upon purchase and the balance is due within three (3) days of the sale. The boat is sold as is, with no warranty or returns.
Please call with any questions or ask through Ebay. Jonas 310-600-1182